Way back in May my little guy turned 5...seriously. It's still kinda hard to wrap my head around that fact.

We celebrated his birthday a little differently this year, mostly because he had plans of his own and my ideas were quickly brushed aside. Sigh. I knew this day would come - lol! His main request was to NOT have his party at home, he wanted to GO somewhere. We've always done our parties at home, so the thought of venturing out of our safety zone gave me some mild anxiety - not gonna lie! 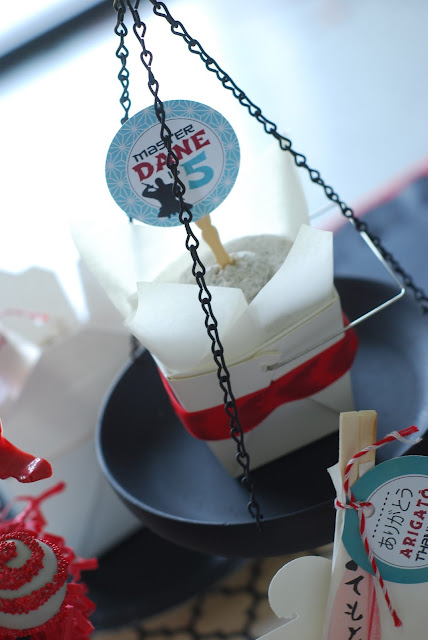 We spent a lot of time trying to find a fun place to have his party. He finally decided on a NINJA Party...but specified that did not want a Ninja Turtle or Ninjago part...in his words, he wanted a "Legit Ninja Party!" This kid. Cracks. Me. UP!

I found a local place, Revolution Martial Arts Studio, that hosts Ninja-themed Birthday Party packages...it seemed like the perfect fit for us!

As soon as we had the theme nailed down I contacted the AMAZING Gretchen of Three Little Monkeys Studio to request some custom party printables. I basically gave her the colors we were working with and told her it needed to be super "legit" and she took it from there - lol. A fun little side story...Dane  was looking over one of the invite proofs Gretchen had sent and was grinning from ear-to-ear. He told me it was perfect, except that it also needed to say, "Your life is more exciting when you're a ninja!" I mentioned it to Gretchen because I thought it was so cute and funny, and she brilliantly incorporated it into the designs. He was THRILLED! 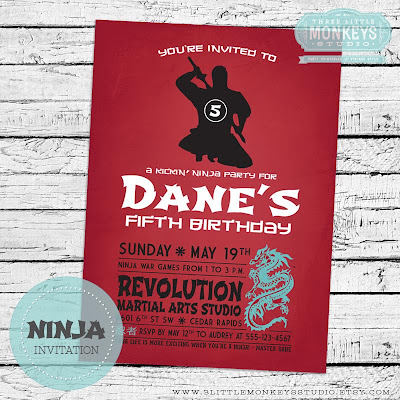 I still wanted to have some decorations, nothing crazy because I would only have 30 minutes to set everything up. I chose to forgo the usual dessert table/backdrop set-up, mostly just to make things easier. Instead I incorporated the desserts into the kiddos' table and it worked really well. 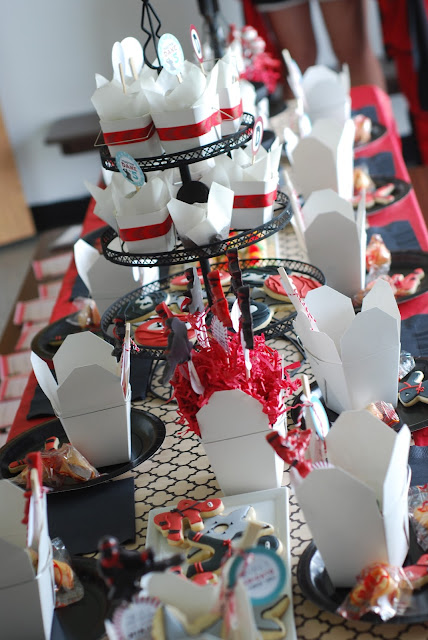 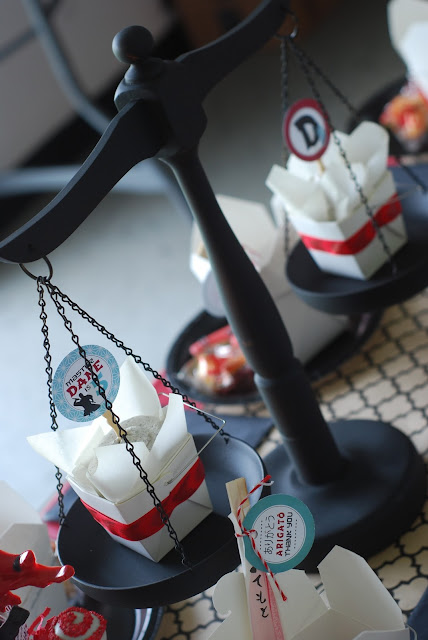 Emily of Emi's Treats worked her magic again and created the most spectacular NINJA Cookies ever! The Ninjabread Men...seriously...hysterical! Dane's favorite were the Ninja Star cookies...they were silver and shimmery...her talent never ceases to amaze me! 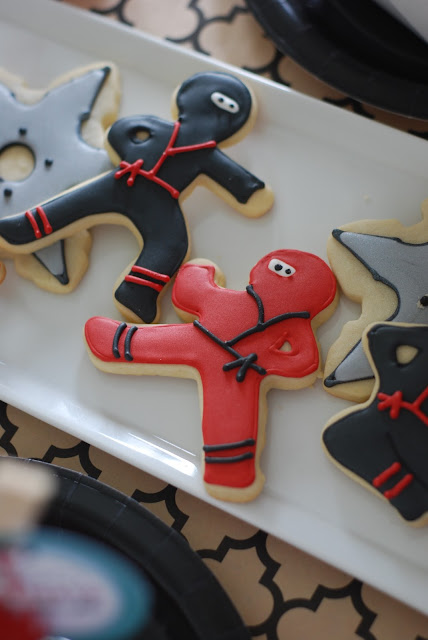 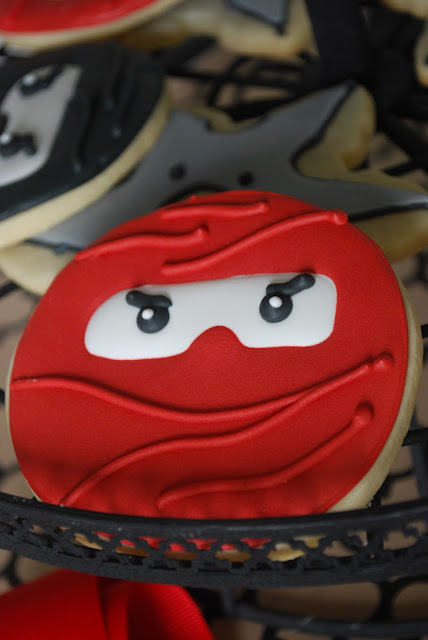 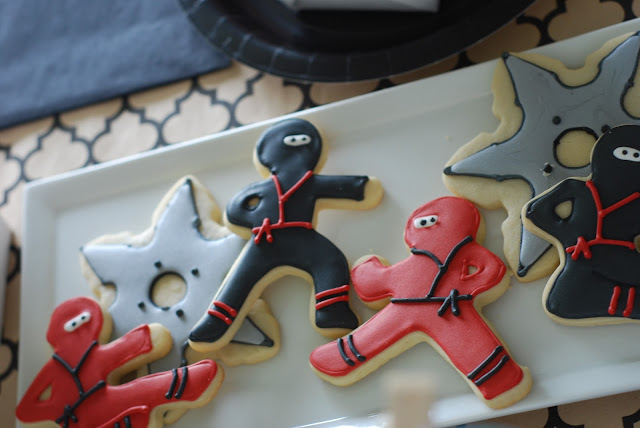 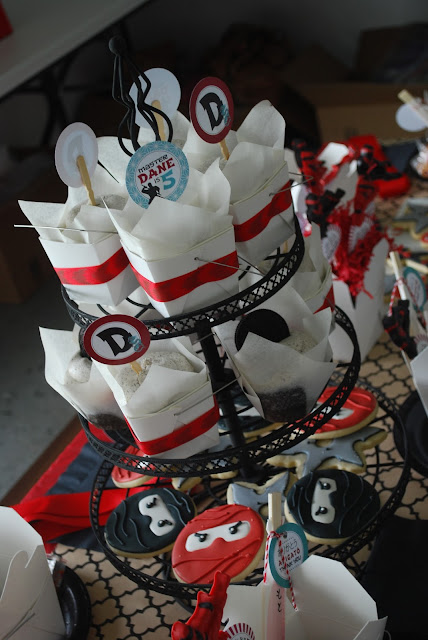 The Birthday Boy very specifically wanted Oreo Cupcakes, which I was happy to make :) For a fun presentation, I put each cupcake in a mini take-out style box decorated with printable cupcake toppers. 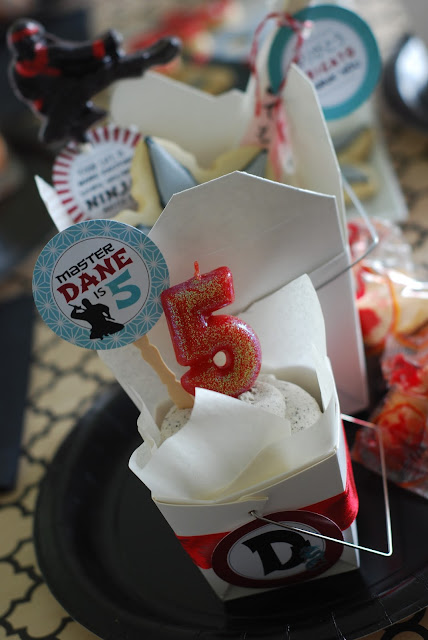 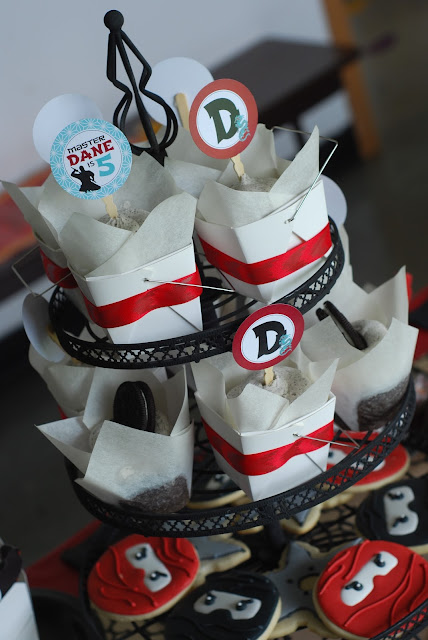 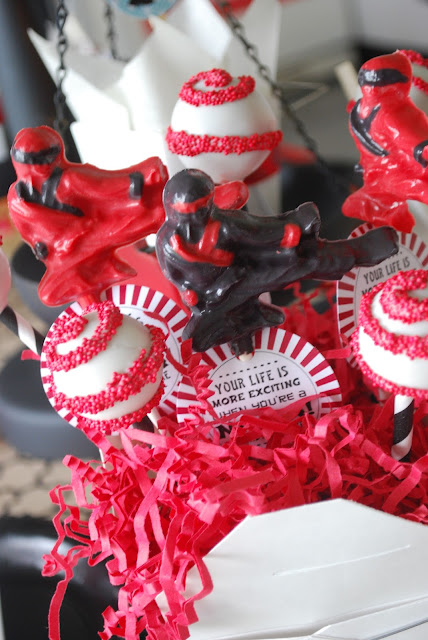 Another fun treat on the table was the Candy Sushi. I had seen several variations of this treat when I searched online. I kept ours fairly simple: gummy fish, Fruit by the Foot, and prepackaged Rice Krispy Treats. All I had to do was a little snipping of store-bought candies with our kitchen shears, some assembling and that was it! I honestly think the Sushi was one of my favorite treats on the table :) 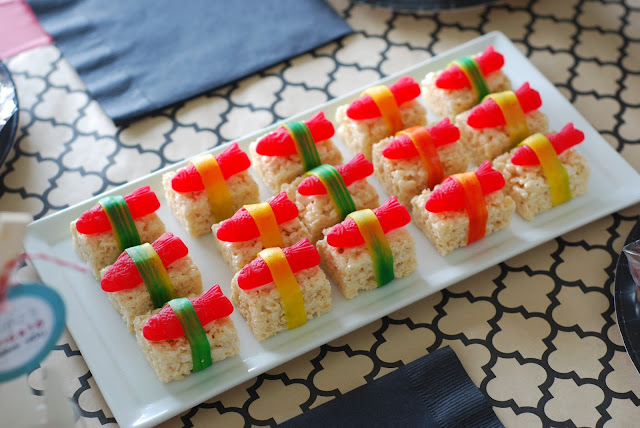 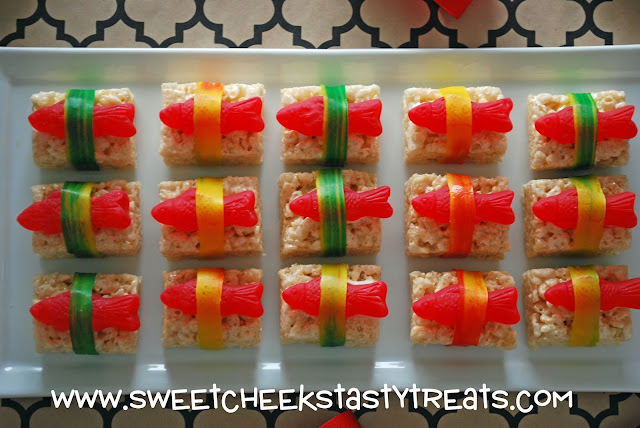 For favors, I found foam Nun-chucks and plastic ninja swords in bulk online. I also picked-up some ninja-themed metal buckets on EXTREME clearance at Target after Easter (we're talking 50-cents a piece here folks!) I very luckily managed to get the exact number I needed for the party...after visiting 2 stores, but it was worth it! 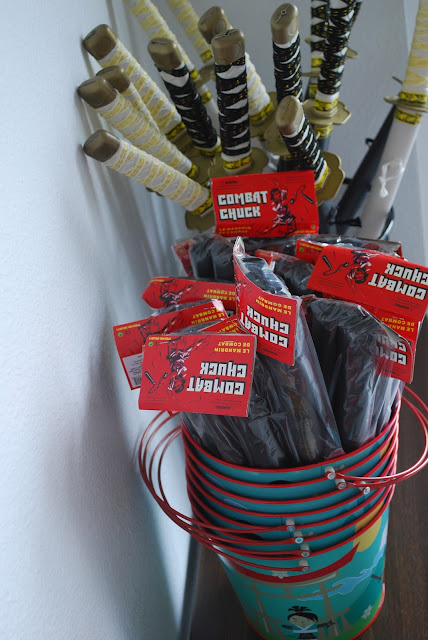 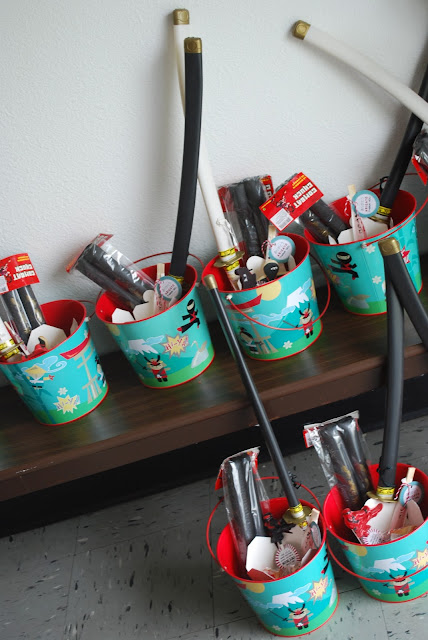 I purchased the take-out containers for the treats from our favorite local sushi restaurant....MUCH cheaper than getting them at the craft store. I also grabbed some fortune cookies and chopsticks while we were there too :) 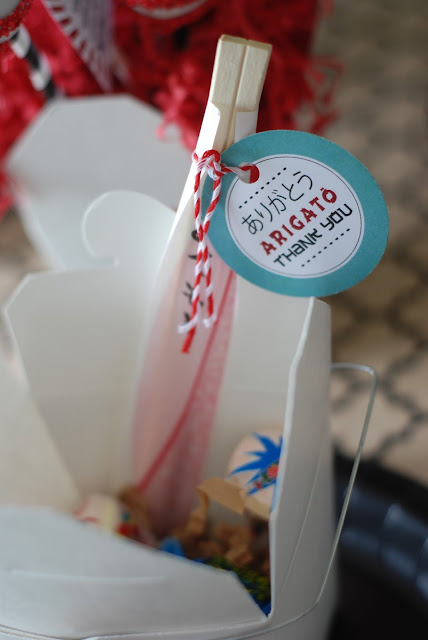 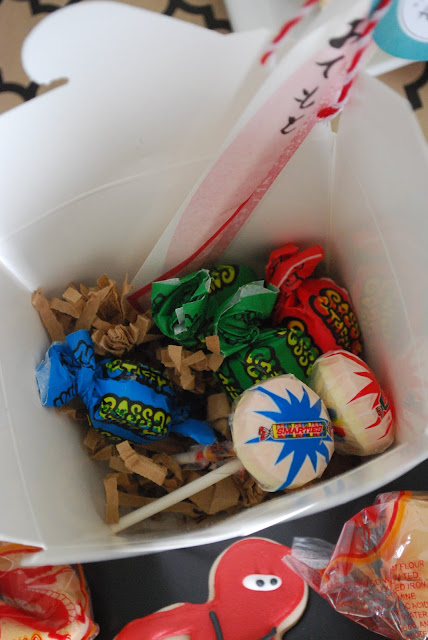 Dane had wanted to wear a LEGIT ninja costume to his party and I was able to find some online that were only $10. I mentioned it to the guests and it was SO awesome...almost everyone got one to wear to the party! They looked like a serious band of mini ninjas :)


The Party Planner in me had a hard time with this one. It was HARD for me to let go of all the little details. I had searched for a TON of fun Ninja-related games and had all sorts of ideas...but...the activities were already planned as part of the package. So I chose to just let that go...those of you who know me personally, well, that's easier said than done - lol! Once we got there I was quickly converted...the kids started going CRAZY Ninja-style...and any reservations I had went right out the window! They had an absolute BLAST! The staff members at Revolution Martial Arts were seriously the best...they really had fun with the kids and it was hilarious to watch. Everything ran so smoothly and the time just flew by, I was beyond impressed. 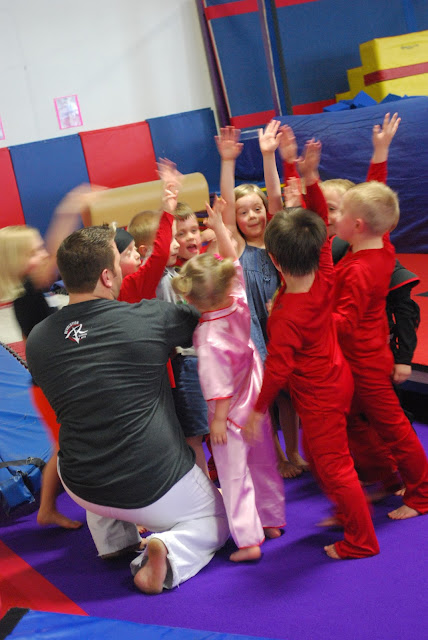 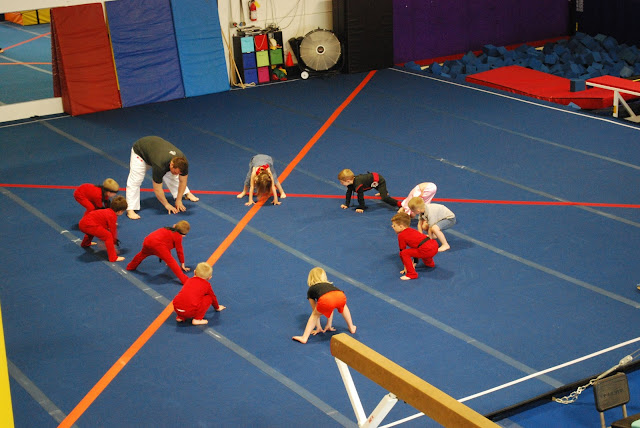