I was SO excited to plan my daughter’s 3rd birthday party. This was the first year where she really “got” the whole birthday thing and she was pumped! I was having a hard time coming up with a theme for this one…until I realized that our little girlie would be turning 3 on March 3rd! 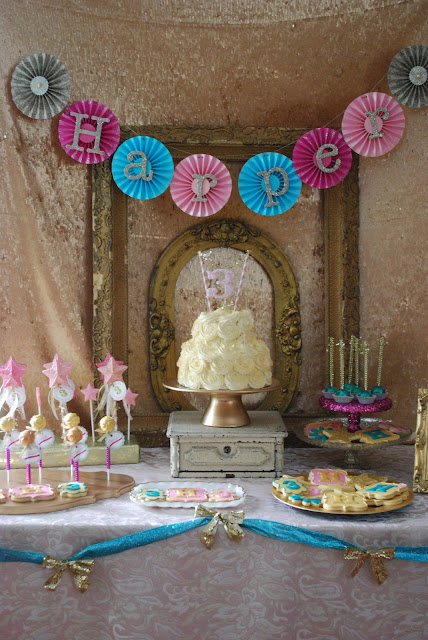 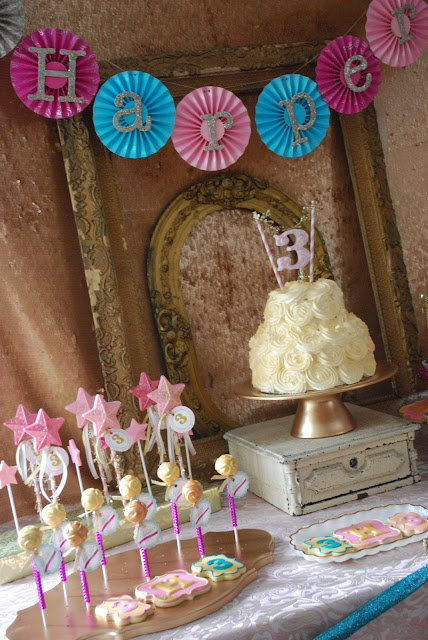 Since it was going to be her {GOLDEN BIRTHDAY} I knew we had to make things SPARKLE and SHINE for her big day. I was thinking lots of GOLD,  lots of GLITTER and lots of STARS for our little Superstar. 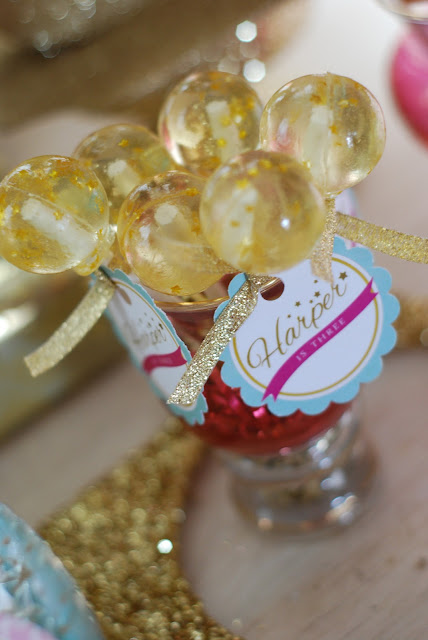 Whenever I asked Harper what kind of birthday party she wanted all she would say was, “Ummmm….PINK!” So I figured we better work that color into our plans as well - lol. I also added aquamarine to our color scheme (the color of her birthstone) for extra fun. 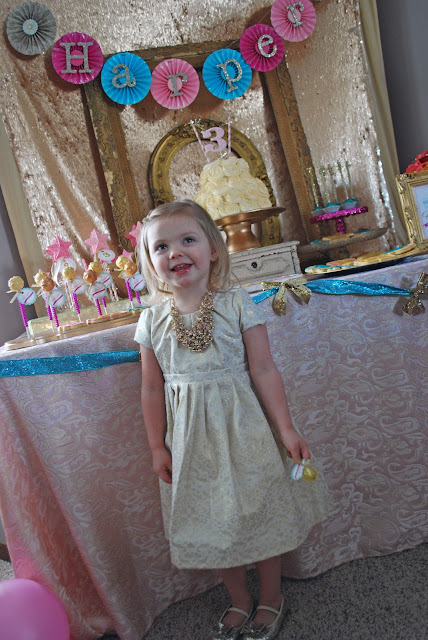 The talented Gretchen, of Three Little Monkeys Studio, created the invitation and coordinating printables. I absolutely ADORE what she came up with! 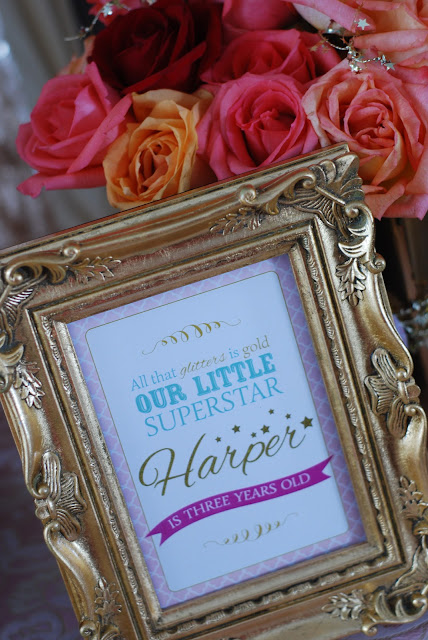 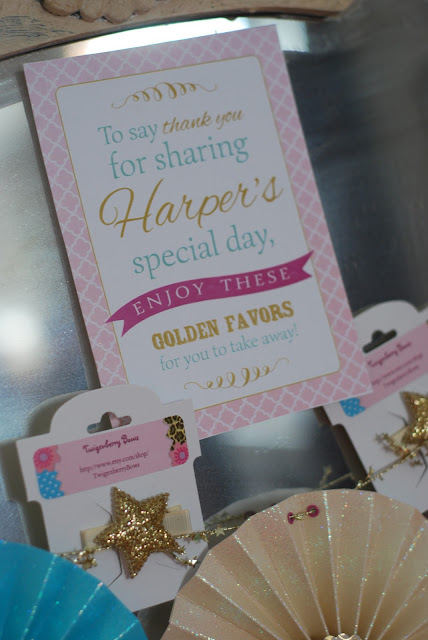 I spent a LOT of time working on GOLDEN Cake Pop techniques for Harper’s party. Thanks to the help of some fellow poppers, Cake Pops by Jennie and Carmen’s Sweet Creations, I found metallic food paint that worked perfectly! 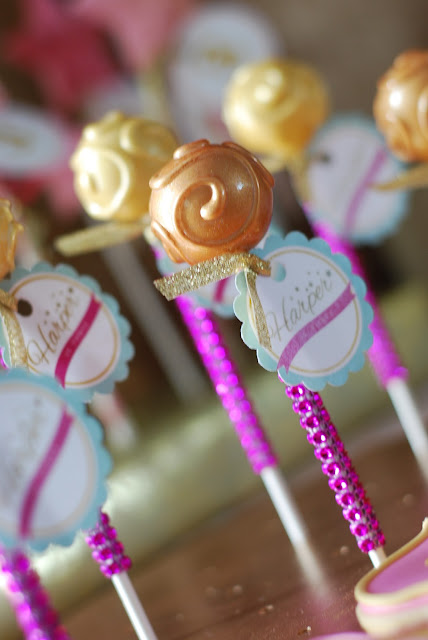 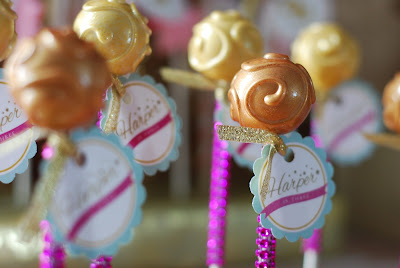 To add even more sparkle to my Cake Pops, I used these fun BLING sticks from Maski Pops by Adri. They were definitely glam and gorgeous! 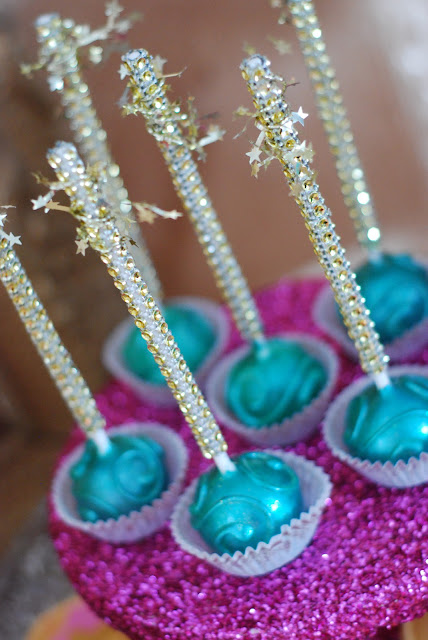 I really wanted something glitzy for the dessert table backdrop and found some gold sequined fabric that was perfect! It was shimmery and shiny, the pictures don’t even capture how lovely it really was. When the candles on Harper’s cake were lit the entire table glowed. So magical! 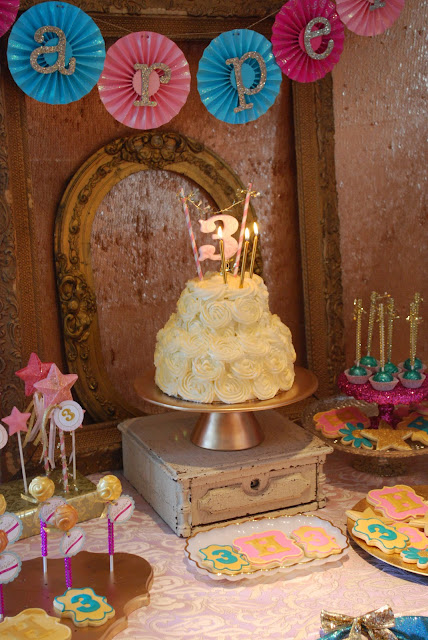 My go-to cookie gal, Emily of Emi’s Treats made the most AMAZING cookies I’ve ever seen! I sent her a few inspiration pics, a copy of the invitation and a photo of the wreath I made and she took it from there. Her cookies are always a work of art, it’s almost hard to eat them…notice I said almost. Since they taste as good as they look I always manage to chomp right in! 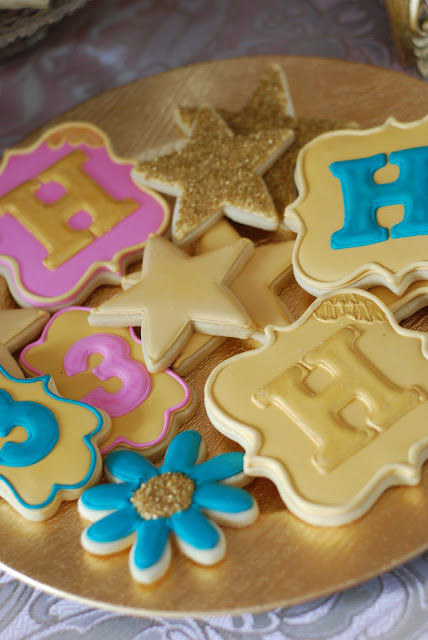 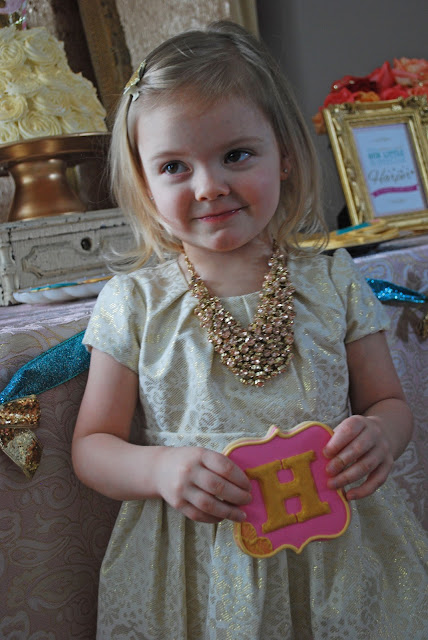 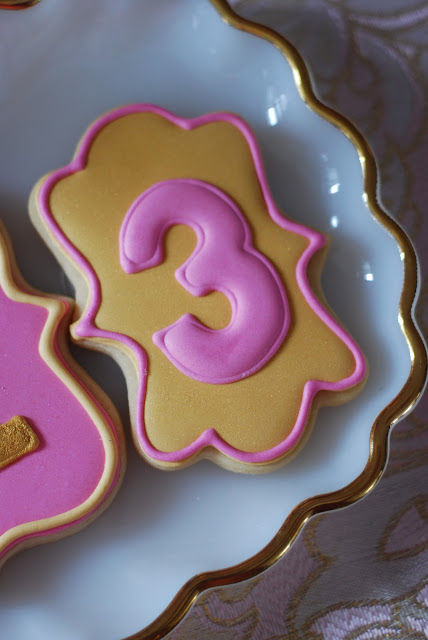 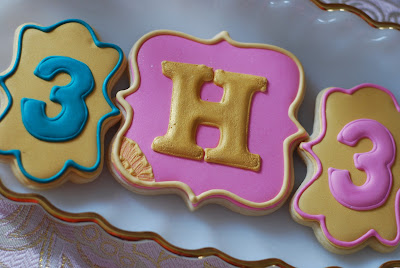 I’ve made the Rosette Cake several times, and the very FIRST time I made it was when Harper turned one. I thought it would be a sweet tradition to recreate that same cake, but add gold-sheen food coloring spray to tie it in to the GOLDEN theme. 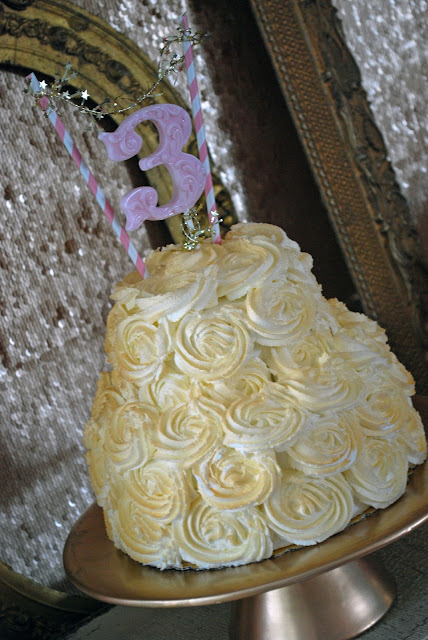 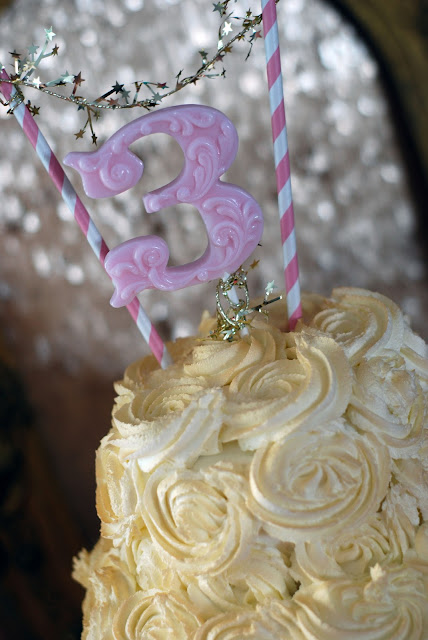 I found a cute, simple glittered star hair clip for Harper to wear at the party from Twiggenberry Bows. I thought they would make sweet favors, so we got enough for all of her girlfriends :) 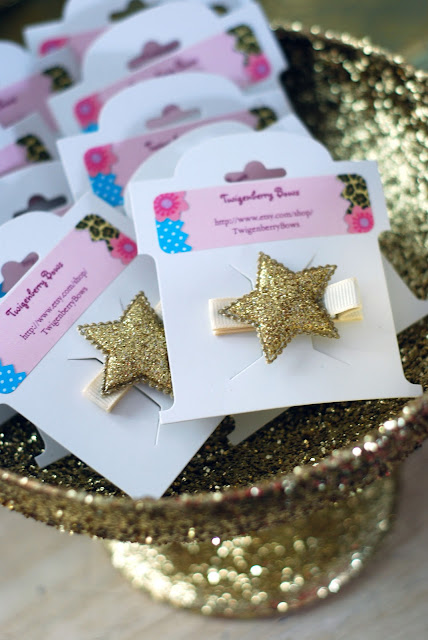 I also found some fun golden wand charms that I thought would be perfect as favors! I liked that we were able to send our guests home with something they could wear to remember Harper’s special day. 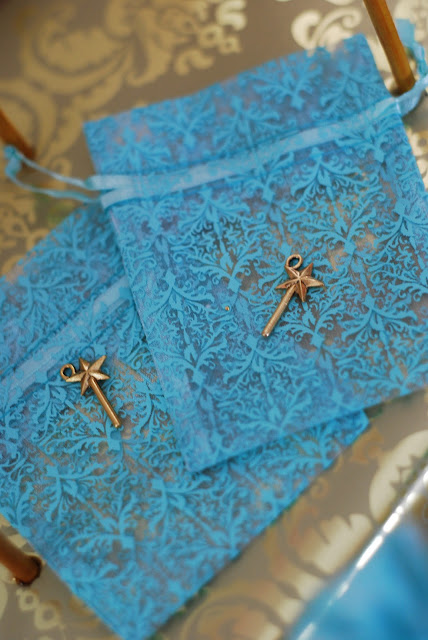 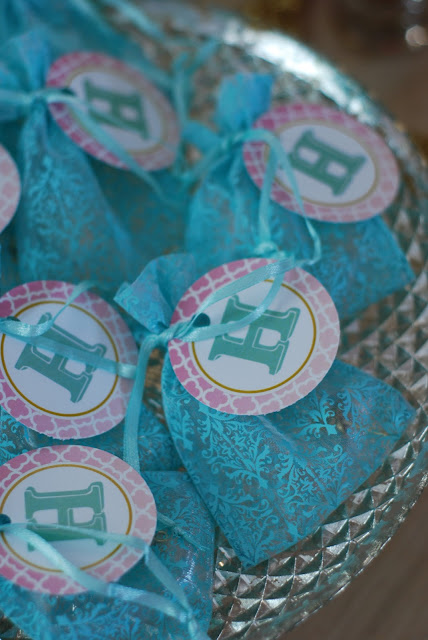 One thing I did a lot of for this party was repurposing! I had several items that had been used for other parties, but after a coat of Mod Podge and a sprinkling of glitter they looked brand new! I glittered several picture frames, cake stands, bowls, even a wreath to add to the party décor. 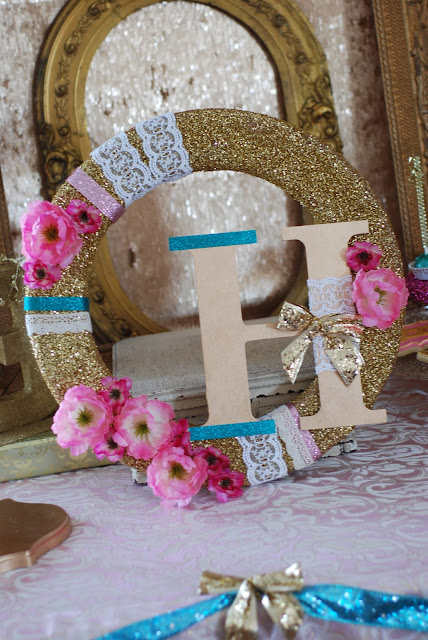 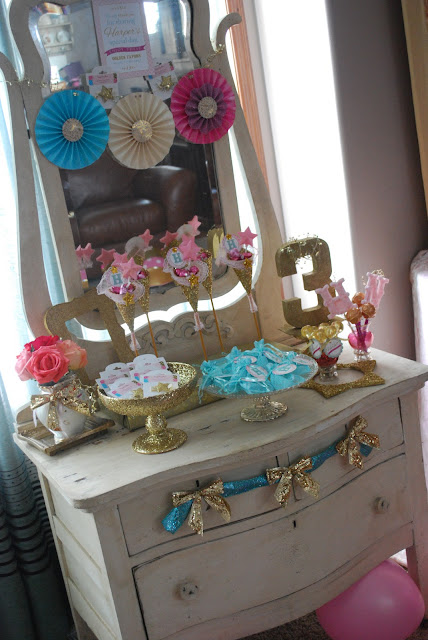 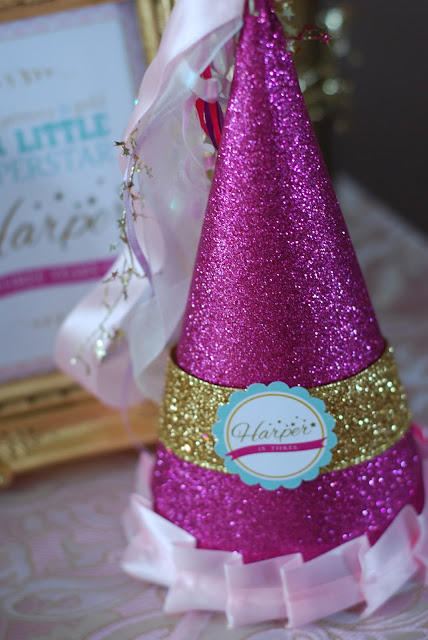 You may recognize the Kandy Kones on the favor table as well! I participated in a Kandy Kone Styling Challenge hosted by Superchickland. I asked Genevieve if I could re-use the Kones she had created and give them a new look for Harper’s party…she loved the idea!  I covered them in glitter to start :) Then added ribbon to some and a printable party circle to finish them off. They were filled with pink wrapped kisses and glittered pink chocolate star pops (created by me!) 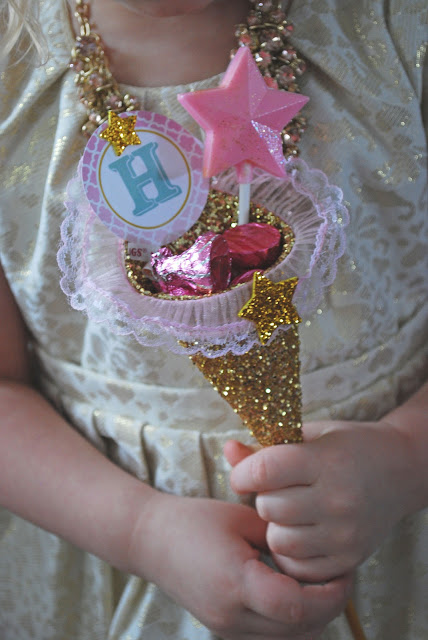 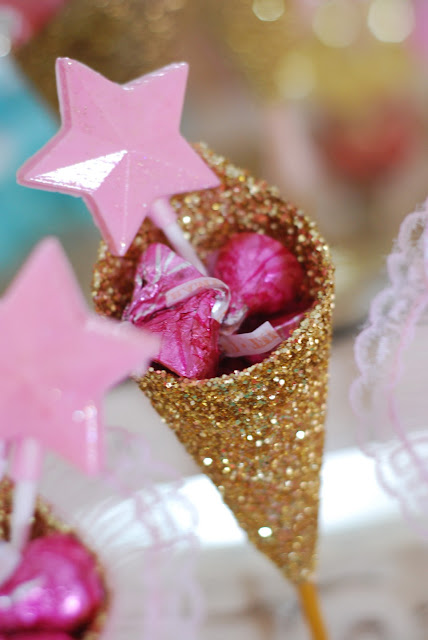 I made Star Wand Chocolate lollipops for the dessert table that turned out super sweet. I added some metallic food paint and edible glitter to give them a little extra sparkle. 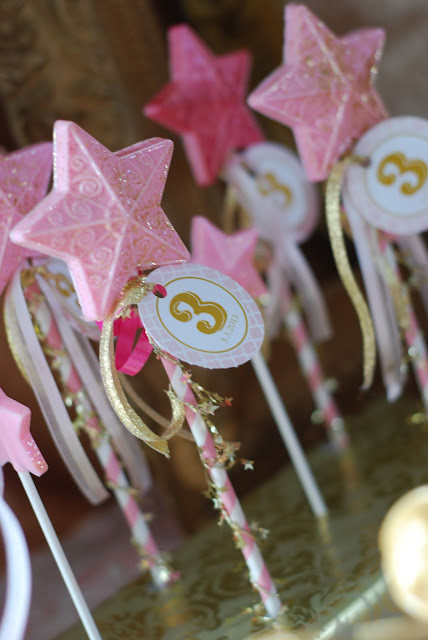 The GORGEOUS banner above the dessert table was created by Jaclyn of Peckled. It was one of my absolute favorite decorations! We’re going to use it to decorate Harper’s room now too. I love when you can incorporate party pretties into room décor after the party. 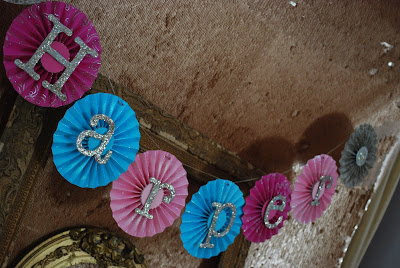 Another fun GLITTERED decoration was the large number 3 on the favor table! Tara of One Stylish Party makes the sweetest glittered numbers and letters….we just HAD to have one! I added a bit of the wired star garland to tie it in with our other decorations and it was perfect. This will be fun in Harper’s room post-party too! 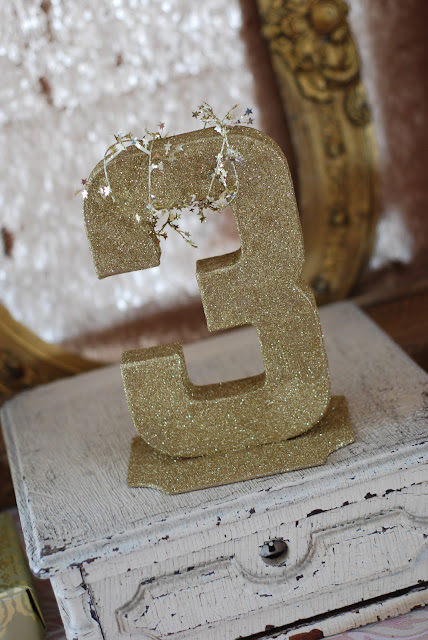 My sweet friend Kimberley, of Kimberley’s Kitchen, makes the most amazing marshmallows you’ll EVER experience. She was kind enough to send some to us for the party…but an ice storm the week before put them off schedule and they didn’t make it in time. Since they couldn’t be enjoyed at the party I decided to include them with our thank-you cards and hand deliver them to the party guests. 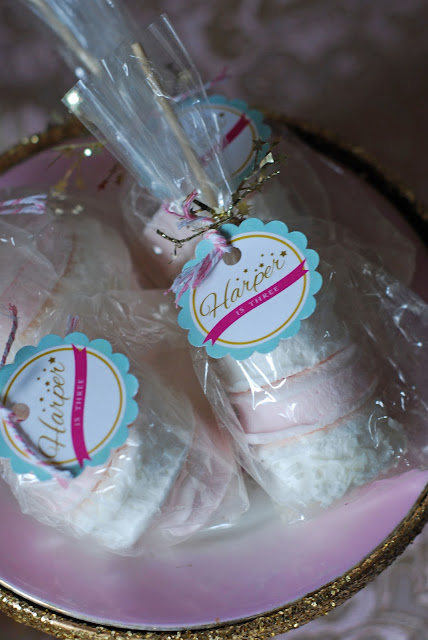 I don’t know if any of you get especially sentimental...but I just HAVE to share this little side story! After I started the party planning I thought it would be fun to give Harper a golden locket as one of her birthday gifts. I love all things vintage, so immediately started looking for an antique locket to give to her. I wasn’t having much luck finding just the right locket. I’m picky, I know. Then I suddenly remembered a locket I had purchased at an estate sale, probably 10 years ago, and thought that it would be perfect (if I could even find it!) Well, I found it in my jewelry box…flipped it over to open it…and noticed an inscription on the back. Just one word. Golden. Seriously, meant to be! 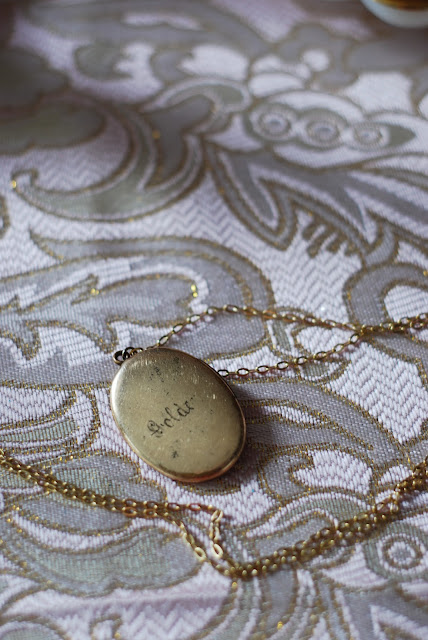 Flowers for the Birthday Girl, from her Daddy & Big Brother.
I love that they went and picked them out just for her! 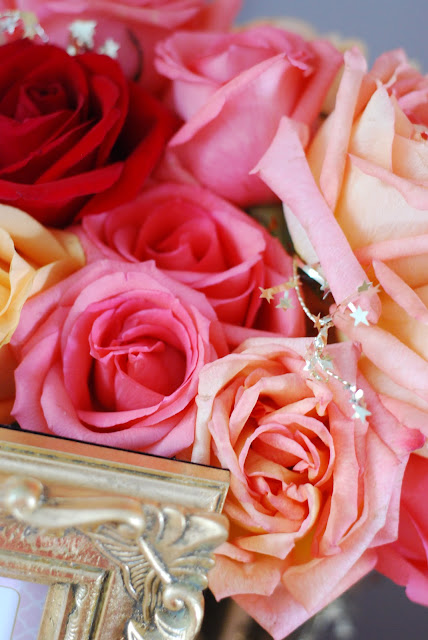