ART Gallery for the KIDDOS!

I have another non-treat related post to share...from the Kiddos' Playroom...by now you've about had the full tour!

I've wanted to create a FUN space for the kiddos to display their artwork...like, FOREVER! I've found SO many fun ideas...and...I've pinned a TON of them, but it was so HARD to narrow it down :) Anyone else have a serious problem with PINNING but not actually DOING!?!? I always have more projects than time it seems. 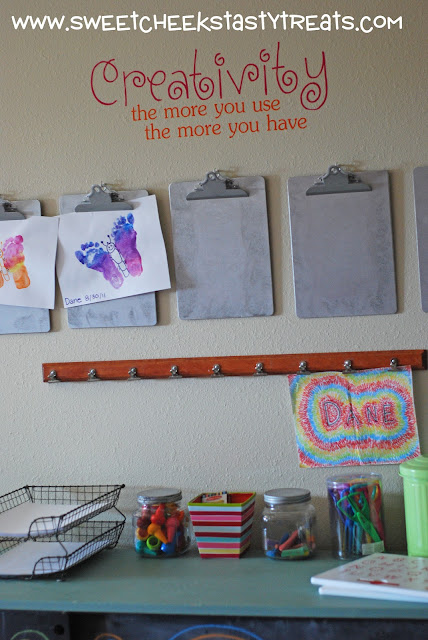 One of my FAVES was a Kids Art Display from Clean & Scentsible {HERE}. I think the main reason I was drawn to it was because it incorporated clipboards...and I just happened to have stash of them sitting in a box doing nothing important. So, I spray painted several of the clipboards with metallic spraypaint to achieve the same look. 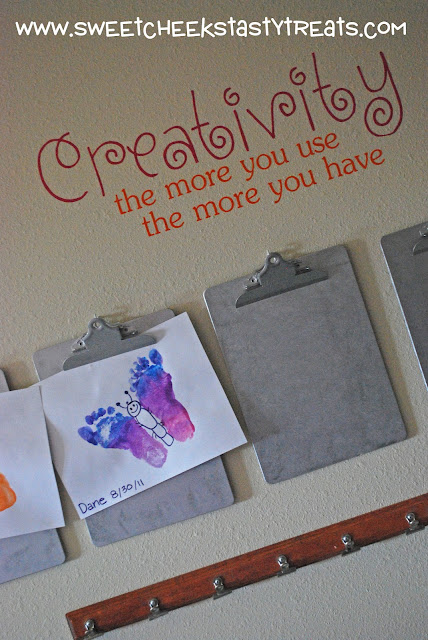 I had a custom vinyl wall quote created by It's Written on the Wall to install above the clipboards. You may recall, they also created the vinyl quote for our Raingutter Bookshelves {HERE}. The saying is taken from a  quote by Maya Angelou, and it is absolutely PERFECT for this wall!

The actual execution of this project ended-up being SUPER quick & easy. We had everything up and finished before the kiddos' got up from their afternoon nap. They LOVE their new gallery and have been BUSY the past few days working on masterpieces to hang in their NEW space!

I'm LINKING UP!
You can find TONS of inspiration by visiting these WEEKLY LINK PARTIES!
I always do...and I'm sharing this project with them NOW!

Friday
Feature Yourself Friday hosted by Fingerprints on the Fridge
Friday Flair hosted by Whipperberry
Catch as Catch Can hosted by My Repurposed Life
Posted by Audrey @ Sweet Cheeks at 12:52 PM 1 comment:

I haven't posted any CUTE Cake Pops in awhile...so I figured I should do something about that!

I created these super adorable FARM ANIMAL Cake pops for a recent birthday party order. I made an assortment of cows, sheep, ducks and pigs...and...it was my first time trying cows and pigs! I LOVE getting custom Cake Pop requests...I'm so busy with orders these days, that unless I have a specific reason to try a new pop, I don't really get to just play around in the kitchen!

They both seriously CRACK ME UP! I always figure I did a decent job when I'm laughing OUT LOUD at my Cake Pop creations :)

I was trying to think of a fun cupcake flavor to make for The 4th of July when I came up with these little beauties. I should have been preparing for The Farmers' Market this coming Saturday...but it seems like my BEST ideas always come to me when I have other "stuff" on my plate. I've learned by now that my mind won't be able to focus on anything until I tackle said-new-idea....so I went with it! 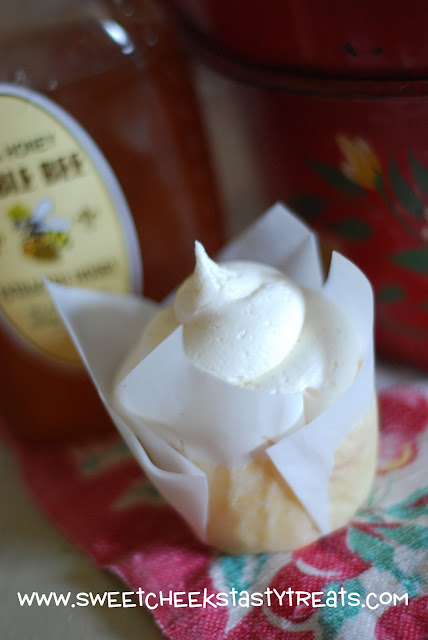 Naturally I thought the new flavor should be something that would fit in at a backyard BBQ. We LOVE Cornbread around here. My cornbread recipe is already pretty sweet (of course)...so I took those same basic concepts and decided to put them in cupcake form .

The end result were these delicious
Sweet Cornbread and Honey Cupcakes! 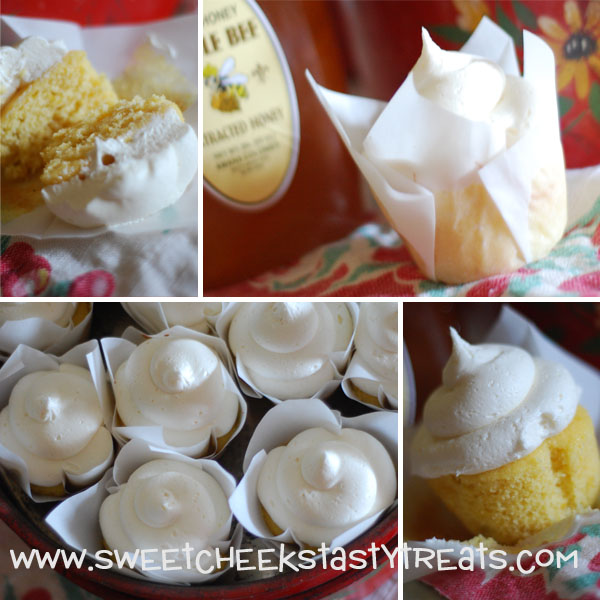 I used my basic yellow cupcake batter as the base, added yellow cornmeal, Noble Bee Honey from the Amana Colonies, and some yummy creamed corn.

After the cupcakes cooled I added MORE honey to the top of each one. Then, to finish, I topped them with an UBER YUMMY Noble Bee Honey Buttercream Frosting.

We took a pile of them along with us to our 4th of July gathering and they were VERY well-received....which always makes me happy! One person even compared the cupcake to Famous Dave's Cornbread Muffins...I took a few without frosting. I've never had the Famous Dave's version, but I was told that it's a compliment to be compared to them :)

I will be taking these with me to market this weekend...so see....I really wasn't procrastinating...I was preparing for market all along!

I've been cranking out a BUNCH of FUN and EASY projects lately. Stuff I can tackle while the kids are taking their afternoon naps...so the easier, the better...and often-times the CUTER as well ;)

Here's one I'm currently OBSESSED with! 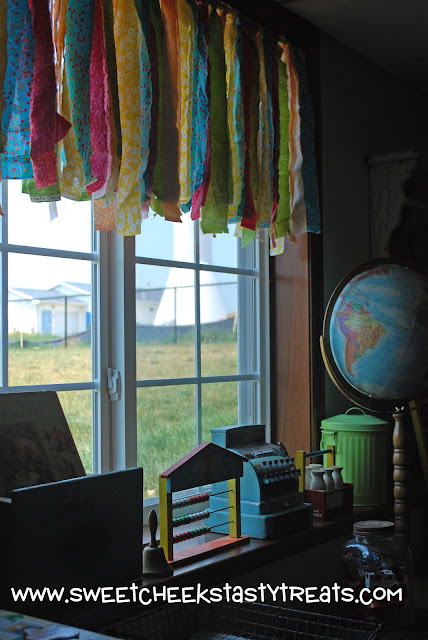 I made these for the kiddos' playroom downstairs. I needed something that would add some FUN color, but didn't really want to block out too much of the natural light that comes in. I've seen variations of window treatments using ribbons on Pinterest, and another version from One Castle in the Kingdom that involved sewing (super cute, but I needed to make them even easier). So I went with simply ripping the fabric and tying it directly onto tension rods. So easy, inexpensive and UBER adorable! 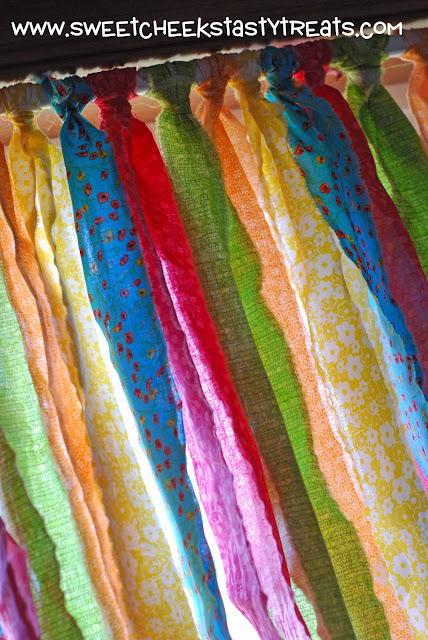 If you want to make some of your own all you'll need is a stack of fabric scraps in whatever color palette you're working with. I actually went out and bought a pile of 1 yard pieces. I have a "THING" for fabric, so any excuse to go snatch some up and I'm there. Honestly though, I don't sew...I just {LOVE} buying the stuff! It's so cheerful, bright and happy...maybe I should learn a few tricks with my sewing machine....in my spare time - LOL!

I also bought two inexpensive tension rods so we didn't have to actually add any hanging hardware. 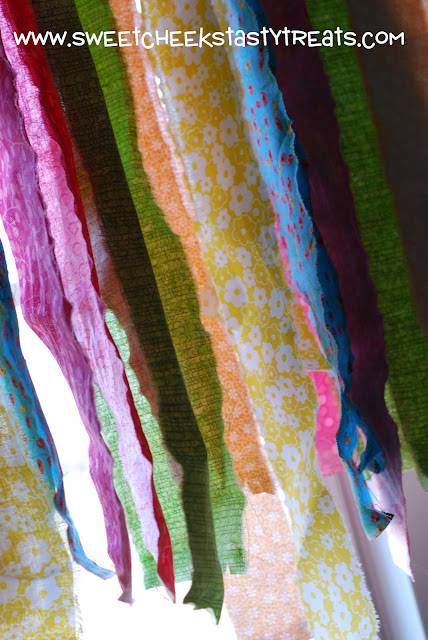 I ripped the fabric in 1 to 2 inch strips, no measuring, just eye-balled it and went to town ;) I think it adds to the organic feel of these...you really CAN'T mess them up! Plus, it's a project the kids can even help with! I didn't quite have it finished up before naptime was over...so they helped me layout scraps and decide which colors should go where.

That's it...simple, fun, and SUPER cute ;) I'm planning on making another rod-full of these for Harper's bedroom...they're just TOO adorable!
ENJOY!
~Audrey


I'm LINKING UP!
You can find TONS of inspiration by visiting these WEEKLY LINK PARTIES!
I always do...and I'm sharing this project with them NOW!

Friday
Feature Yourself Friday hosted by Fingerprints on the Fridge
Friday Flair hosted by Whipperberry
Catch as Catch Can hosted by My Repurposed Life
Posted by Audrey @ Sweet Cheeks at 1:11 PM 8 comments: